Academic Archaeology: what not to wear

"Do you only ever wear black?"

Now there's a question I hadn't been asked since I was about 17. Don't know. Hadn't really thought about it. The months of summer bring a world of archaeological fieldwork and the assorted muted greys, greens and khaki colours of combat-dig-wear, but full on winter-lecture mode....?

Strange question for a student to ask.

When I first started in academia, some 25 years ago now, the university-powers-that-be did attempt (briefly) to enforce a dress code on their staff - something about lecturers having to regularly look smarter (at least in clothing choice) than their students (so that the two tribes could, perhaps, be more easily distinguished). Some hope. I did once toy (very briefly) with the concept of jackets / shirts / ties / waistcoats. Silly idea. Not me at all.

In the world of pop culture archaeological academia, of course, as I've noted before, we've got the great Dr Jones as a role model, slipping effortlessly from the monotonous world of chalk and talk, where tweed and sensible ties rule supreme 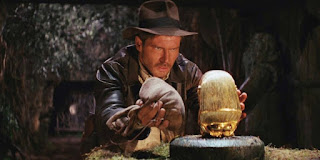 There are no hard and fast dress codes when it comes to real world archaeo-academia though (as a glimpse at any university archaeology undergraduate programme will no doubt amply demonstrate). There was a time when (I think) I did wear colours (albeit mostly baby sick and food stains) but dark clothing does help one to blend into the gloom of a poorly lit lecture theatre just as khaki, I guess, helps the avid archaeo-practitioner blend into the dusty fields surrounding the average dig (perhaps archaeologists simply don't want to be seen?).

Many years ago, when I first dipped my toe in the world of televisual archaeology, a producer in the know told me that, if I wanted to work full time in TV (which, at the time, I wasn't really convinced that I did) I needed to be noticed. "Get a distinctive personality trait" he advised, "something that gets you remembered. Better still" he went on "dye your hair, get a tattoo or some form of prominent facial piercing. Even better than that" he grinned "wear brightly coloured or hideously mismatched clothing. In short, you need to stand out from the crowd".

Having not gone to art school (and having already completed my undergraduate experiments in clothing - all best forgotten) I remained stubbornly unmemorable and dressed as myself, contrary to the advice given.

Over the last couple of months, as I gorge on my daily lunchtime diet of Bargain Hunt (don't worry, I do still have a job), I can't help but notice that this advice is, apparently, still being given (and actually being heeded by those in the auction-related world). All it takes for experts to be remembered (and re-employed) is to create a TV persona based on distinctively memorable clothing. Hence there's the distinctive, brightly coloured scarf: 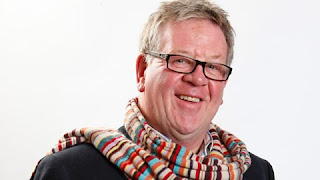 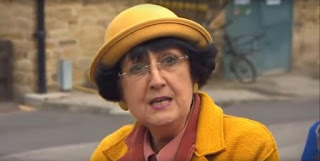 the distinctive scarf and hat: 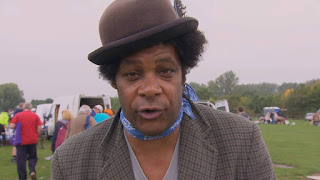 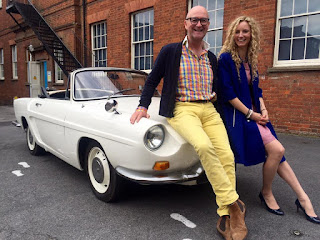 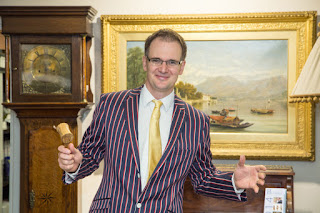 and, most memorable of all, the distinctive hat, scarf, bow tie, coat and facial hair combo: 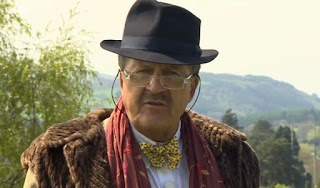 In comparison with this, how can the average real world archaeologist compete? 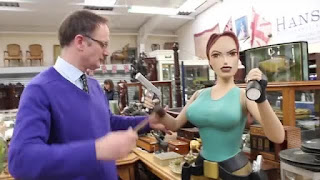 Dark (unmemorable) colours for clothing then it must remain for me...at least until I fade and become part of the archaeology myself.

I was very pleased to see the news headlines last week that a new study of prehistoric DNA appears to suggest that "at least 90% of the ancestry of Britons was replaced by a wave of migrants who arrived about 4,500 years ago" [the Guardian]. 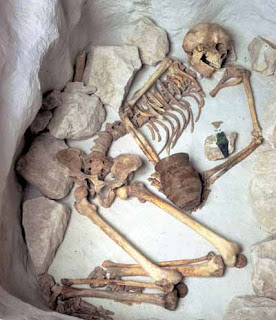 In the earlier 20th century, it used to be thought that 'Beaker pottery' represented a particular type of artefact belonging to an aggressive, colonising people who swept across Europe from the east bringing knowledge of metalworking with them: hence reference in the contemporary archaeological literature of the ‘Beaker Folk’.When I was at university (a few centuries ago now) we were told that such ideas concerning prehistoric migration and invasion were simply wrong - there was no such thing as 'the Beaker People' (and even the term 'Beaker-using-people' should be avoided if at all possible).

Using a traditional approach to archaeological artefacts, of course, it is easy to argue that Beaker assemblages are the physical manifestation of a specific ethnic group, and most early attempts at explaining cultural change interpreted the arrival such material in terms of an invasion or folk migration. The invasion hypothesis was very popular in the years leading up to the Second World War and archaeological maps drawn throughout the 1930s, purporting to show the distribution of Beakers and the spread of metalworking across Europe, look instead as if they are plotting carefully planned military advances. Directional arrows became the march of armoured regiments. Artefacts were weapons. Site names became battlefields. 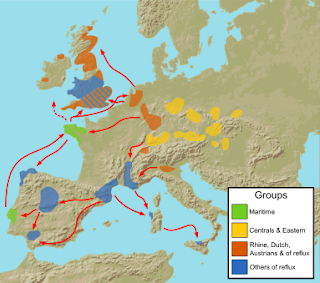 This view of aggressive acculturation underwent a gradual process of revision throughout the 1960s and ‘70s. The ‘New Archaeologies’ that evolved during that period stepped away from the invasion hypothesis, which appeared to provide a rather simplistic take on the evidence, and progressively replaced it with ever more subtle concepts. The arrival of Beakers and metalwork, it was argued, was due to a more passive form of cultural change. To put it simply, it was suggested that people altered their lifestyles through choice, and not because they were forced to. Change, it was argued, occurred through peaceful social interaction, such as trade. There was no need to explain the Beaker phenomenon in terms of war, migration or conquest.

Never being entirely convinced by all this, I did argue (in the books Monuments of the British Neolithic, The Early Neolithic Architecture of the South Downs and Prehistoric Sussex) that the so-called Beaker package "could easily (and quite plausibly) represent the archaeological trace of an invasion or migration – the durable remains of a small, militarily strong social group that replaced the social elite in a given area, taking ultimate control of local resources". This point (in particular) received a barrage of criticism in the reviews that followed, one writer (who still works in archaeology) describing the argument as "complete nonsense" - little more than "meaningless posturing" whilst another noted that they were "writhing in annoyance at the crass images drawn" and hoped that both myself and my books would "soon be forgotten".

At the time, such 'reviews' left me depressed and angry, not least of all because it was clear that those writing the comments appeared to have wilfully misunderstood large sections of the books condemning the conclusions as they went against their own (wholly subjective) point of view. Today, with the considerable benefit of hindsight, I've learnt to recognise that if I'm annoying people quite this much then I must, after all, be doing something right.

The news that the Beaker phenomenon could indeed have been the result of prehistoric mass migration and invasion, the degree of population replacement involved being far higher than anyone could have imagined, has pleased me inordinately. 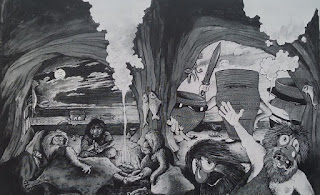 Even taking the hyperbole that always surrounds archaeological discoveries (especially when reported in the popular press), I do sincerely hope that the academics who have long argued against the idea of population movement being the catalyst for cultural change are now chewing on their crayons in frustration.

Now, if you'll excuse me I'm off for a spot of meaningless posturing...