Clarke Kent Syndrome 2: a warning from the present

Since my last posting it has been (somewhat delicately) pointed out to me that, just like Horatio Smith and Daniel Jackson before, I also appear to be suffering (at least in the early stages) from CKS (Clark Kent Syndrome)....how could I have missed it?....the signs were so obvious...the symptoms so clear. 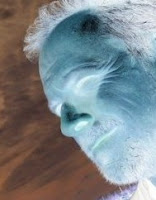 This, as noted already, is a condition that seems to affect the 'fashion' of the 'archaeologist' (two words that should not normally be placed together in the same sentence), especially the academic archaeologist, more than any other profession (although, as the name implies, it also affects aliens from the planet Krypton who are hiding on Earth pretending to be journalists). It would therefore seem that I have been in the world of academia for too long and need to 'get out more' (to be fair, people have been saying this for a while).

Apologies then to my readers (both of you). I'm now off to complete the only known course of treatment, lying down in a darkened finds hut trying not to think about anything archaeological for at least fortnight....it's going to be tough, but it's the only way.

No Decorum in the Forum 3: Plebgate

And so the furore continues about who said what to whom, how much Latin was used and who, precisely, cares.

Ex-Tory Whip Andrew Mitchell claimed that he did NOT direct the word 'Pleb' at a serving police officer guarding the gates to Downing Street now may be actually prove to have some substance. As a result, many Conservative MPs are now calling for his reinstatement and rehabilitation....er, now hang on a minute. This is a politician who freely admits that he swore (using all manner of apparently acceptable earthy Anglo Saxon expletives) at two serving police officers for the heinous crime of preventing him from cycling through a non-cycling gateway (and therefore causing him the agony of having to walk with his bike, thus extending his journey by all of 13 seconds). 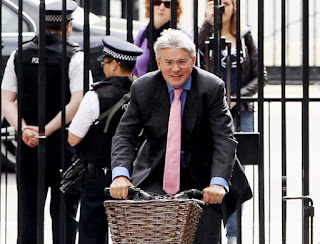 For the embarrassment of having to so publicly conform to regulations, Mitchell seemed to think it was fine to direct all manner of expletives at the police.

Swearing at a police officer is an arrestable offence (at least for those not in the Conservative party), but the press seems to have been most concerned about the apparent use by Mitchell of the word 'Pleb', a Latin word for the great unwashed, which Mitchell has always denied having used (apparently he thinks he used 'a milder' version of the word....er....no, I don't know either). Curiously, the use of Latin in this context does not, at least to me, to be the main concern. No one, least of all Mitchell himself, seems to dispute that he overreacted and that offensive swear words were used, possibly with some force, at serving police officers. Now I'm sure the officers in concern were thick skinned grown-ups who are sadly used to being called far worse, but a serving politician should know better, should lead by example and should not flaunt regulations (then default to foul-mouth mode when caught out).

Plebgate (possibly the only time that the word 'gate' has been applied to a scandal where a real gate has formed the focus of attention) has now become an argument about who said what to whom, who was there and whether a Latin word that some find abusive (but most probably won't) was or was not said. Trouble is, the press (and indeed all the Tory MPs who are now lining up to support Mitchell) seem to be saying now that "it's OK to swear at the police; it's ok to flaunt the law if you think you own the country". 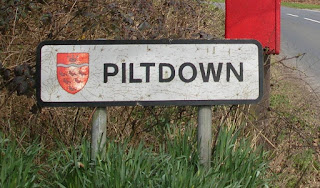 Piltdown Man (or Eoanthropus dawsoni to give him his proper name) remains the greatest scientific hoax (that we know of in any case) of all time, the fragments of human skull, an ape-like jaw and worked flints unearthed to the south of a quiet Sussex village, was, a century ago, hailed by the world’s press as the most sensational archaeological find ever: the ‘missing link’ in the chain of evolution. The news spread quickly, anthropologists, geologists, and archaeologists all voicing their eagerness to examine the find. The cradle of humanity was to be found in the counties of southern ; it was official.

Of course it wasn't..

The “Earliest Englishman” was a hoax (not just any old hoax mind, the London Star declared it at the time to be “THE BIGGEST SCIENTIFIC HOAX OF THE CENTURY”). There never had been a ‘missing link’ preserved in the gravels of Piltdown; the whole discovery had been part of an elaborate and complex archaeological forgery. 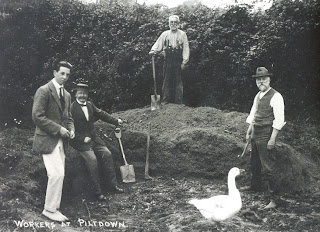 Well ok we don't know exactly when the most famous scientific hoax was precisely 'born' but we can be pretty sure when he was conceived (somewhere between November 1911 and February 1912) and we can be sure that, after a 10 month gestation period, he was officially brought kicking and screaming into the world on the evening of the 18th December 1912 at a meeting of the Geological Society in London. It was there that the 'finder' of the Earliest Englishman, Charles Dawson, together with his co-director, Arthur Smith Woodward of the Natural History Museum, presented the artefacts and their theory to the hushed audience. 100 years to the day I was in that self same room in the geological society giving a paper on Charles Dawson and why it now seems pretty clear that he was indeed the perpetrator of the hoax (and of at least 35 previous offences which also now need to be taken into consideration), which was kinda spooky, but good, in terms of 'resolution'.

Piltdown is one of the most famous 'brand names' in archaeology today, something that annoys a lot of people (as it's not a genuine archaeological find and, worse, it's something which successfully derailed research into the human past for a not inconsiderable period of time), but I admit to finding the tale rather comforting (in a strange way) as it's the point of which archaeology, as a science, woke up and grew up, becoming far more questioning, and far more critical about the nature of 'evidence', in the process. It was, after all, the archaeological finds of early humans made around the world in the years after 1912, with their more human faces and ape-like skulls that helped dethrone Piltdown Man (which had these critical features in the wrong order), way before the nature of the hoax was finally revealed in 1953.

I have to say that I also have a bit of a soft spot for Charles Dawson. Not for what he did (that was ultimately unforgivable), but for the way that he did it. was a masterful forger: he gave people what he knew they wanted and what they had searched for for so long. He also did everything with such style. What would have happened had he been found out in his life (he died in 1916) we will never know, but I'm sure he would have 'gotten away with it too' (in classic Scooby Doo style), if only it hadn't 'been for those darned kids' in 1953.

When died, Piltdown man’s story ended too, there being no more finds of the most elusive of Englishmen from the gravel pits of . 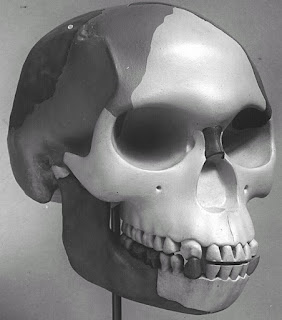 The thing about field archaeologists, in my experience, is that they call a spade a spade (their work in dealing with past societies telling them that life is too short to do otherwise). The thing about managerial bureaucrats is, in my experience, they get so wrapped up in mystifying their work (in order to justify their own existence) that they would prefer to call a spade a steel-bladed soil interface device.

The trouble with working in a modern University today is that the differing worlds of 'real work' and managerial bureaucracy will not ever collide (nor be satisfactorily joined). There will always be some element of conflict. This conflict is nowhere clearer than in the classroom, as the chief objectives of a university degree programme are, in my opinion, to get the students to work hard, to keep an open mind, think for themselves, question everything and speak / write clearly and intelligently. The chief objectives of bureaucracy are, in my experience, the exact opposite: work as little as possible, maintain a blinkered view, question nothing and speak / write in an obtuse and confusing manner (Douglas Adams, in an all too common moment of quite beautiful clarity, observed that Bureaucracy in its purest form “is a parasite that preys on free thought and suffocates free spirit").

Ladies and Gentlemen, I give you an example of the ever expanding gulf between rationality and bureaucratic technobabble taken from a document which I (foolishly in retrospect) opened in the hope that it might explain how a particular element at work (my workplace environment) could help (facilitate) with my teaching (student interfacing) and research (enterprise shopfronting). Here is what the manager (head of enterprise architecture) said to help (facilitate) my understanding (cognitive comprehension) of what his team (workplace collective) could offer (their 'deliverable objectives') and what they hoped to achieve (their 'vision').

To understand business and academic requirements providing an effective and efficient support service for staff, students, the learning and teaching environment and research and enterprise activities to a high level of customer satisfaction

Ok, lost me a bit after ‘understand’, but I think I'm still with you…

To implement a network and technical infrastructure which has the capacity to support the increasing demand for network bandwidth, database activity and file and document management providing security, resilience and business continuity


To implement a teaching, desktop, mobile working and remote access infrastructure, making use of technological developments to optimise access to information systems to meet a variety of staff and student requirements.

My own particular vision, after reading this gem of plain speaking, is a lot simpler, and one which I will gladly share with you, for it involves the head of enterprise architecture unexpectedly discovering that their operational bandwidth has been enlarged through the judicious application of a steel-bladed soil interface device directly to their insecure and decidedly unresilient career hub.

Seriously. Thanks to the Man of Steel's rather ludicrous disguise, when not leaping buildings in a single bound (or cleaning toilets with a single growl), the be-caped, pant-over-the-tights-wearing super dude slipped easily back unoticed into the shadows of Metropolis, simply by doning a tweed jacket and a pair of glasses. Was I the only one screaming at the comic page / cinema screen / TV "for pity's sake Lois, Clark Kent IS Superman, look at him LOOK AT HIM, it's Superman with glasses on....he's even got the SAME VOICE !!!", but no, the ace reporter from the Daily Planet and every other citizen of Metropolis looked straight at Clark Kent, and saw only Clark Kent. They did not see the the evil-mastermind-fighting caped crusading hunk beneath.

No evil-mastermind-fighting caped crusading hunk would EVER don glasses and a tweed jacket would they? What a masterful disguise indeed. 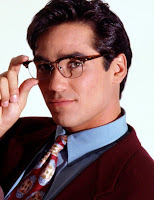 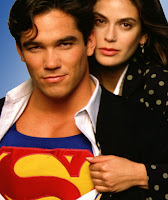 Indeed yes, but boy what an effect Clarke Kent Syndrome (or CKS) has had upon the archaeological profession, well at least those antiquarian explorers who occupy the quasi-fantastical world of cinema. For most authors / screenwriters / directors / producers, the imbalance between the monotonously dull chalk-and-talk world of academia and the gut-wrenchingly exciting world of tomb-raiding field archaeology cannot easily be resolved. How can the teacher become the explorer; the academic become the adventurer?

Well, quite easily as it happens....by utilising CKS. Yes, simply by taking their glasses off anything can happen! Easy really...don't know why I didn’t think of it before.

If you don't, here's something that may explain CKS and those who suffer from it. 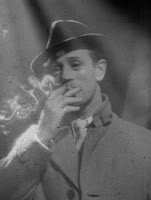 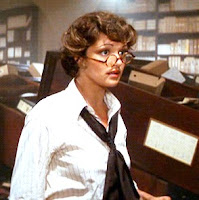 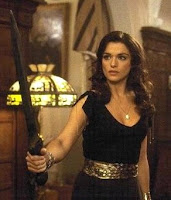 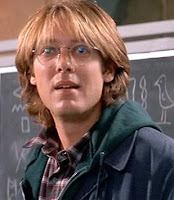 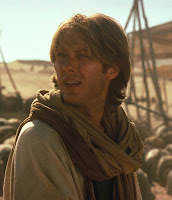 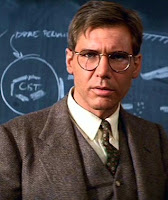 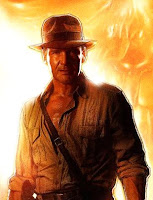 Remember to give generously this Christmas....CKS can really mess with your head.
Posted by Miles Russell at 14:36 3 comments: